The Frozen Castle by Lisa 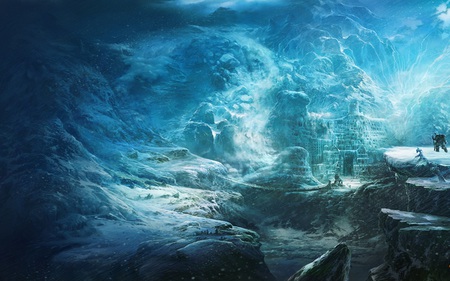 I sweep the frost from the path, whisking it away, just as my lady always asked of me when winter came. Some small part of me asks why I bother, when it will only build up again, with no feet to wander it but my own, and that of my broom.

It’s a curse that brought this everlasting winter on the castle of my birth. A curse, and love. Though what the difference is these days, I’m only half sure I remember.

With the grounds cleared, I gather my courage, to walk among statues.

END_OF_DOCUMENT_TOKEN_TO_BE_REPLACED

All of humanity’s life, represented by a long, endless thread. Clotho, the first of the Fates, spun the thread onto her spindle, beginning that particular life. Lachesis used her measuring rod, allotting each person a certain life span, while Atropos used her ‘abhorred shears’  to cut that life, in any manner she saw fit.

This was how a person’s life course, or fate, was decided, according to Greek mythology. The Moirae, or Fates as they’re commonly referred to, were three spinsters who apportioned life length and death, and as such were given great honor (or perhaps even feared) by the Olympian gods themselves.

According to the tales, the Moirae came to see a child seven nights after its birth to

determine its life course. They were often viewed as remorseless and unfeeling. Atropos’ Roman equivalent was Death itself, or Morta. They were often depicted as old crones or hags, which might be why being an old spinster is looked down and feared by young maidens in so many cultures.

Re-evaluating these mythic characters, I couldn’t help but think of Sleeping Beauty and Disney’s rendition involving three faeries who come to bless the child after her birth. Three is a very significant number in many cultures. Also, does anyone notice that touching the spindle is what ‘ends’ her life? Or puts her to sleep in this case? I definitely think they were touching a bit on the Fates mythos.

Anyone know of any good YA stories involving the Fates? The Thief, which I reviewed yesterday, had a nice nod to the Moirae in the form of a woman, Moira. Definitely worth a look.

Fairy godmothers are pretty much ubiquitous in the world of fairy tales, right?  I mean, they’re everywhere!  Or… so it seems.  Actually, when you stop to think about it, though, that’s not quite true.  Oh, it’s true when you start to look at contemporary stuff, and retellings, of course, but take a glance at the wide canon of fairy tales out there in the real world, and you start to realize that they’re not quite that common after all. In fact, if you think about it, only two of the basic fairy tales happen to involve fairy godmothers—they just happen to be about the most famous fairy tales of all.

Of course I’m talking about Cinderella and Sleeping Beauty.  You might be surprised (or not) to hear that in many renditions of Cinderella (including the Brothers Grimm story of Aschenputtel) Cinderella is helped,not by a fairy godmother, but by the spirit of her dead mother.

Okay, so now that I’ve told you all about what fairy godmothers, aren’t, let’s take a look at what they are, hm?

Firstly, the reason that fairy godmothers are so rare in fairy tales to begin with, is because they really don’t act much like fairies.  I mean, think about it.  Fairy godmothers are generous, and always looking out for the well-being of their charge, whereas fairies in general will, if they pay any attention to humans at all, do their best to spite them and/or cause them harm in some way that amuses the fairies.  They’re not exactly known for their benevolence.

In early stories, also, fairy godmothers had all the normal duties of a regular godmother, and were often representative of social connections—think of the blessings the three good godmothers give to the princess in Sleeping Beauty.  Fairy godmothers were, in a subtle (or sometimes not so subtle) way, a lesson in the old adage that it’s not what you know, but who.  It certainly would be difficult to turn down connections with someone who had magical powers to bestow!  But fairy godmothers—like any other powerful connection, were understood to be someone you were to show respect to, or beware the consequences.  Think, for example, of the wronged godmother in Sleeping Beauty—you don’t want those powerful connections turning against you!

Fairy godmothers were also largely associated with the Fates of Greek mythology at one time.  You can see this the clearest in Sleeping Beauty also, with the number of three [good] godmothers, and with all that spinning going on. 😉

Interesting, isn’t it, that something fairly rare in fairy tales ended up being so huge in our modern vernacular?  I mean, really, how many times have you heard someone say something like, “She is like, my fairy godmother!” ?  On the one hand I find it kind of strange, but then on the other… I guess it really does make a lot of sense.  Because who would forget the possibility, after you’d heard that story?  Who’s ever walked away from Cinderella not half-hoping or wishing that she had a fairy godmother of her own, to wave a wand and give her a pretty dress and a shot at the kind, beautiful (if not slightly plastic-looking) prince?  Not many of us, I don’t think.

If you want to check out some more modernly tales of fairy godmothers, have a glance at My Scary Fairy Godmother by Rose Impey, or Godmother: The Secret Cinderella Story by Carolyn Turgeon.