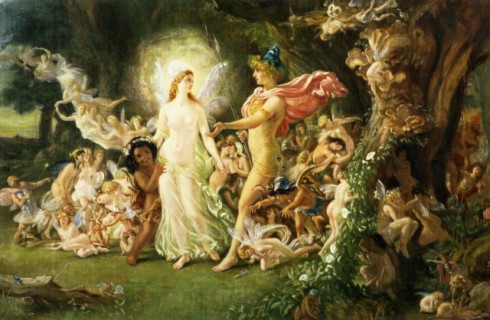 Oberon is best known from Shakespeare’s Midsummer Night’s Dream, the king of the faeries who interferes with the love lives of mortals, and plays tug-of-war with Titania over trinkets and toys (read: people) they both want.  Oberon was most likely taken from a legend of a Merovingian sorcerer named Alberich, or “elf-ruler,” who was believed to be the other-worldly brother of Merowich, whom the people got their name from.

The name Oberon first showed up in a French heroic song, about a fairy who was cursed  to a dwarfish height by an offended fairy at his birth (hello, Sleeping Beauty?) but was given great beauty in consolation.  In the poem, Oberon aids the hero in winning a pardon for killing the emperor’s son in self-defense, after performing various feats.  This poem was based on bits and pieces of fact of a true hero who lived in the ninth century, but was understandably embellished.  In it, Oberon had a magical cup, which has been compared to the Holy Grail, which was always full for the virtuous.

In Midsummer Night’s Dream, Oberon wants to a human child that Titania’s taken into her care—it’s the child of a mortal friend of hers who’d died, and she wants to raise it for her friend, but Oberon wants to have the child for his own purposes, to raise as a henchman, basically.   To distract her, he uses a magical ointment that he has put into her eyes, so that she falls in love with a man who’s been given a donkey’s head—meanwhile he has his servant Puck meddle with two pairs of lovers that are wandering in the woods, with a mistake or two made along the way.  Eventually he feels badly for what he’s done to his Titania, though, and the two are reunited.

Given the title of King of the Faeries, Oberon is understandably mentioned here and there in other works of fiction, of a more contemporary nature.  As a few examples, he’s mentioned briefly both in Susanna Clarke’s Jonathan Strange and Mr. Norrell, and also in Frewin Jones’ Faerie Path novels.

Probably if you had to read A Midsummer Night’s Dream in high school, you know a little bit about who Puck is.  Puck was originally a pagan trickster, and he’s been recycled in legend and fantasy as many times (and in as many forms!) as you can imagine.  Because of this it’s not entirely sure where exactly he originated, be it German or Celtic origins.

Quite often, Puck is a character that will do good deeds and housework in exchange for a bowl of sweet milk—but if you get on his bad side or insult him, then all his work is undone in a moment, possibly leaving you worse off than when you started!

Usually Puck is a sort of sprite or fairy who belongs to the forest, and of course he’s also often seen as a servant and intermediary for Oberon, king of the fairies.  Occasionally, though, he’s shown as a satyr, with the legs of a goat, as a sort of reflection of the god Pan.

Originally it was bad luck to say Puck’s name, as in the saying “speak of the Devil and he shall appear,” which is why he’s also called Robin Goodfellow—when he goes by Robin Goodfellow he seems to be a little more generous to mere humans!  Interestingly, though, he’s also called “hobgoblin”—not exactly what that term brings to your mind nowadays, is it?  And traditionally he laughs with a “ho, ho, ho,” like Santa Claus!  Lots of little crossovers in mythology with our Puck here.

Shakespeare’s Puck is perhaps the one we’re most familiar with today, and his own description of himself (to Titania, who recognizes him) tells you a bit more of his devious ways:

Thou speak’st aright;
I am that merry wanderer of the night.
I jest to Oberon and make him smile
When I a fat and bean-fed horse beguile,
Neighing in likeness of a filly foal:
And sometime lurk I in a gossip’s bowl,
In very likeness of a roasted crab,
And when she drinks, against her lips I bob
And on her wither’d dewlap pour the ale.
The wisest aunt, telling the saddest tale,
Sometime for three-foot stool mistaketh me;
Then slip I from her bum, down topples she,
And ‘tailor’ cries, and falls into a cough;
And then the whole quire hold their hips and laugh,
And waxen in their mirth and neeze and swear
A merrier hour was never wasted there. (Act ii., Scene i.) 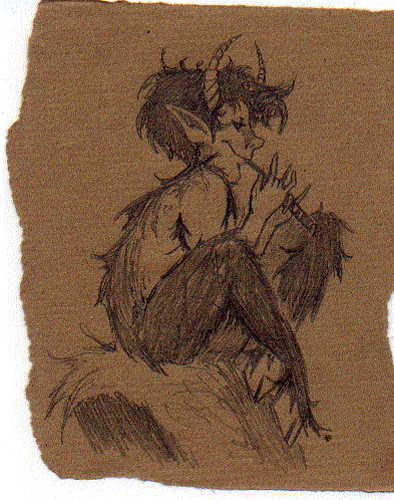 Puck’s mischief is always done under the moonlight.  According to “The Mad Merry Pranks of Robin Goodfellow,” attributed to Ben Jonson, he’d also sometimes douse lights in order to sneak kisses from women, or sometimes steal their sheets!

In 1906, Rudyard Kipling of Jungle Book fame (among other things, of course!) wrote Puck of Pook’s Hill, where Puck was the oldest thing in England, the last of the “hill people,” or fairies, and that’s a fairly fitting thing to call him, as Puck does continually seem to show up in popular culture. We’re not quite done with Puck as a culture figure, even now.

If you want to check out Robin Goodfellow, definitely read A Midsummer’s Night Dream, if you haven’t, or at least watch the movie!  If Shakespeare’s not your thing, though, Puck also makes appearances in Neil Gaiman’s comic, The Sandman.

There’s no doubting, Fae are the new vampire. They’re appearing everywhere, from the innocent and playful Tinkerbell to the more dangerous, sexy fae of the romance genre. Young Adult literature is no exception. Since opening Hollow Tree, we’ve already reviewed two books involving Faeries and there’s no doubting that there will be more to come. The human fascination with Fae is not new. One very famous instance is William Shakespeare’s A Midsummer Night’s Dream, which crashes the human world and the faerie world with disastrous and hysterical consequences. Faeries also made appearances in medieval romances, usually meeting with (and at times conflicting with) the knight errant of the tale. Morgan le Fay, or Morgana as she is commonly known, is perhaps the most well known Fae in Arthurian legend. Although with time, she was denounced to human status and made more of a sorcerer.

In literature, Faeries are commonly mixed with other magical creatures such as the nymphs and satyrs of Greek mythology. But the Fae are a group all their own, classified into Seelie and Unseelie.

The Seelie, meaning blessed or holy, are supposed to be the more approachable of the two castes, interacting with humans, warning them of dangers, asking for help, and even showing kindness in return of a favor. Still, they are fond of mischief and get into it often.

The Unseelie, unblessed or unholy, are malicious, evil fae with no remorse or compassion for their actions.

As a group, faeries are known to be masters of deception. They can even change their outer appearance, at times classifying selkies and kelpies as being in the fae family. Most times, they appear as the most breathtaking, angelic creature, more lovely than any human could ever be.

Despite being supernatural beings, legends have created ways to protect oneself from faeries. Iron is the most common and well known weapon. It is said to be as poison and fae will not even go near it. But there are also charms and herbs that are supposed to repel them.

All in all, I don’t see the faerie trend going anywhere. They’re magical creatures that can be approached in new and interesting ways and that are constantly changing shape in the public eye. Some great reads involving faeries are Wicked Lovely by Melissa Marr and Fairy Tale by Cyn Balog.