Midnight on the Steps of the Palace by Lisa 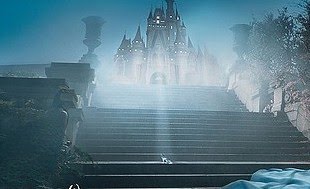 I don’t mean difficult—I mean flat-on-your-face impossible. In fact, flat on my face is exactly how I ended up when I attempted it. One heel dislodged, my toe was still trapped, and there I was, sprawled on the marble steps, the bounty of layers from my dress thankfully breaking my fall.

The palace guards were on me in the blink of an eye. Surely someone trying so hard to get away had a nefarious reason for it, and they wanted to stop it.

That was how it happened that after an hour and a half of dancing with me—and by dancing I mean all but carrying me as he twirled; it’s impossible to dance in glass slippers also—the prince abruptly met my true self, strong-armed by two men the size of trees.

END_OF_DOCUMENT_TOKEN_TO_BE_REPLACED

Breath of Life by Isabelle

Sculpture by AnnG at DeviantArt

He lived alone at the far end of the Great Forest, among the Whispering Trees. His cabin was a humble man’s: small, quaint, simple. Not much more than the basic necessities of life, a place to sit, a place to eat, a place to rest- and the delicate touch of a woman sprinkled randomly throughout. The yellowing lace curtains. The portrait of flowers spilling from a watering can above the mantel. Fine china collecting dust on the very top shelf of the cupboards. END_OF_DOCUMENT_TOKEN_TO_BE_REPLACED 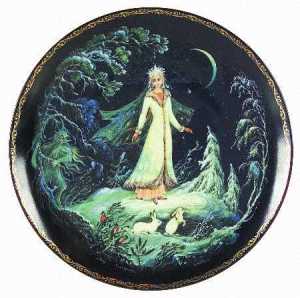 Snegurochka is the title character of a Russian fairy tale, a beautiful maiden made of snow.  In many stories she is the daughter of Spring and Frost, but in some stories she’s the daughter of a poor old couple who’ve built her out of snow (there’s a Japanese story that’s similar-but-different, I’ll get to that sometime!).

Every version of the story, however, ends with her demise due to her longing for human companionship.  This comes about in a number of ways.  In one of the stories, she leaves the forest against her parents’ wishes and joins with some girls.  At one point, the girls play a game where they take turns jumping over a small fire—Snegurochka gets halfway across and turns into a cloud of vapor.

Most common, though,  is the story where Snegurochka comes to like a shepherd named Lel, but because she has no heart, she cannot love him.  In despair she tells this to her mother, who pities her and gives her the heart she craves—but her heart is so warm that it melts and kills her.

In another version of the same story, her mother gives her a heart and she falls in love, only to be melted by a sunbeam, and in yet another the music Lel plays for her moves her so much that she cries, and her tears melt her away.

Basically, Snegurochka is doomed no matter which way you look at it.  But it’s still kind of a beautiful story.  I admit, I’m a sucker for any story about a person formed out of inanimate somethings.

If you’re interested in this fairy tale, there is both a ballet and an opera that use it as a storyline, along with a bunch of other adaptations—you just have to keep an eye out for them! 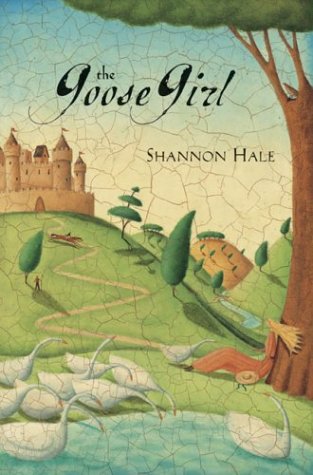 Ah, the Books of Bayern.  The Goose Girl is Shannon Hale’s retelling of a classic, albeit slightly lesser-known Grimm’s Fairy Tale about a young princess who travels to a far kingdom to marry a prince, but along the way is sabotaged by her clever, charismatic handmaiden, who then rides into the new kingdom claiming to be the princess, leaving the true princess to try and find her own way, beginning with working for the king as a humble goose girl.

I won’t tell you more than that, (though of course you can look the fairy tale up!) but I have to say that I love this book.  Shannon Hale takes a page-long fairy tale and turns it into a lovely, epic novel.  The book is a bit slow, but it’s so rich it reads like melting chocolate.  This is the book that made me want to write some sort of fairy tale of my own, because the language in it is just so beautiful and expansive, and that’s what I wanted a book of my own to sound like—not that my style is at all like Hale’s, hers leans towards poetry in some spots.

What really makes this novel fantastic are the side characters.  There are characters here that are developed more later on in the Bayern series (that’s the kingdom name, just so you know) that I just love beyond words, but I’ll get to that as I talk of the other books.  The main character here, Ani, the princess Isi in disguise, is a masterful storyteller who gains followers because of the beautiful stories she tells, and that’s a storyline that any writer can fall in love with. 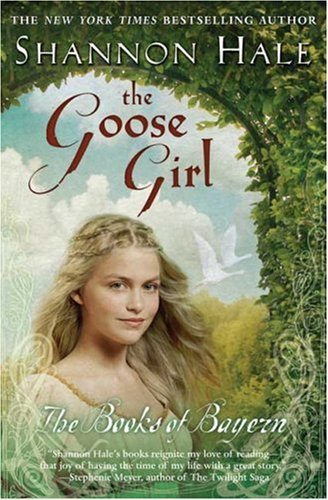 y people are pulled to follow and help her, are proofs of her royal nature.  In the end, the imposter princess has no real chance.  There’s a great twist as to how she’s dealt with, too, that’s straight from the brothers Grimm, so if you don’t like to be surprised, don’t read the fairy tale before you read the book.  Even if you know the original story by heart, though, there’s something here to delight and enchant you.

The book covers have recently been redesigned, probably because it’s difficult to tell from this original, pastoral-painting-esque cover that this is the first novel in a series, or that it’s a Young Adult fantasy.  The new cover, to the right, definitely says that clear as day.  I’ll admit I’m a bit partial to the old covers, but the new ones are quite nice, too.  Either way, I’ll have to get used to them, because the fourth novel Forest Born, available September 15th, is definitely in the new style.  At this point I don’t really mind, though.  I’m just happy to see another book in this beautiful world!

I give The Goose Girl a contented A.

Stay tuned as I talk about the sequels, Enna Burning and River Secrets in the upcoming weeks!

Finally!  I’ve been having some disappointing reads lately, so far as YA fantasy goes, but I read Cyn Balog’s Fairy Tale in two days this weekend (probably would have been one, if I hadn’t started to late on Saturday!) and I just loved, loved, loved it!  This was exactly the book I’ve been wanting to read, a lovely combination of fantasy and real life, that while doesnt make fairies out to be nice, shiny helpful things, doesn’t make me sick at the thought of how awful they are, either.

The set-up is this:  Morgan Sparks has grown up next door to her best friend and boyfriend Cameron Browne, and the two of them share everything, including a birthday!  But as their sweet (or “studly” in Cam’s case) sixteen approaches, Morgan has to deal with the fact that Cam, her sweet, hot, star-quarterback boyfriend is… turning into a fairy.

My first reaction to this is… wait, he’s turning into a fairy?  I didn’t know if I could quite wrap my head around that.  And yet, Cyn Balog pulls this off very, very nicely.  So nicely, in fact, that I could probably read it over again right about now.  I certainly don’t want to give away the twist in the story, but let it be known that it is absolutely worth it, and Balog’s quick, quippy narrative is just a delight to read, and makes Morgan feel very much like a real-live girl, which is something that I’ve been missing in the books I’ve been reading.

And I totally fell for the guy by the end.  Totally.  Which is also something that’s been lacking in my recent YA fantasy reads.  Fairy Tale totally earns its big ending, and I whole-heartedly recommend this quick, fun, surprising read.

Rapunzel, a Retelling by Lisa 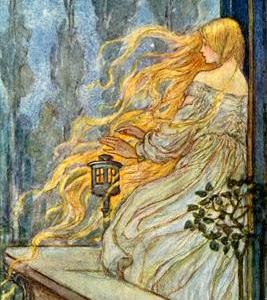 My mother wasn’t quite the woman the stories have made her out to be.  Ugly, cruel, to lock a beautiful young girl up in a tower with no chance of escape and no one but herself for company.

The truth was, I went in willingly.  She didn’t force me, or put me into an enchanted sleep until the deed was done.  She told me she wanted to protect me, to keep me from the horrible things of the world.  And I was a vain and naïve child.  She told me I was beautiful and I believed her—it was very lucky for me that I truly was.  She might have had a twisted perspective of the world, and she might have taken advantage of my young and trusting mind, but I did trust her, and if I had the option of going back now—not to the tower, understand, but to her—I probably would.

She had been beautiful once, and loved and admired for her talents, one of the last of her kind, of the revered witches.  She was born too late, outlived her sisters, was chased and persecuted.  Can you blame her for wanting to hold fast to something, someone she loved?

I harbor no illusions, however.  I know she is not my true mother, that she stole me from a pair of peasants as a display of power.  I’ve seen them, since, the woman staring longingly after me, a woman who looks like me, who I used to dream of though I was hardly old enough to remember her when I was taken.

But that woman never brushed my long golden hair, or told me stories of the songs the moon would sing, long ago, as my mother did.  My rescuer would only have me remember that in my tower I had no door, but I had a window, and the sky, and every possibility open to the imagination that those things could bring me.

It was more difficult than I can tell to leave that cozy room, full of all the lovely things she could give me.  To give up my entire world, just for him.  She would most likely kill me now, the poor woman, as I’ve betrayed all her trust and broken her heart.  That he is a prince, that he is rich and handsome and benevolent, is easily enough understood.  That he is worth it… remains to be seen.