Sorry to be late in posting this! This is short, but in my defense, it’s in answer to this blog hop and is crossposted to my personal blog.

I seem to hear the crack of the bullet before I feel it. And then I’m pushed back, slammed like I’ve been hit by a fist or a train—not a piece of metal smaller than my pinky toe.

It takes another heartbeat for the pain to hit, searing and screaming its way through me, my whole body on red alert, my blood racing to see what’s wrong, what’s wrong. Only to slip and drain out of me.

I can’t remember where I am or how I got here. Can’t remember the enemy who has shot me, even. Can’t fathom who could hate me so much. All I know now is that I am dying and alone—that there is a hole torn through me and that the poets are right.

My heart pounds harder than I can remember ever having heard it, as if it knows the blood running to leave my system isn’t enough and wants to help—stupid heart! I want to tell it to slow down, but my whole mind is in a panic.

And that’s when the fear hits me. I’m not afraid to die—so much of my life has been spent on the run, it’s a relief to finally stop—but in that split second, I seem to see all the things that I’ll never do, never have a chance to do, and that scares me. All the time I’ve wasted, all the opportunities that I skipped out on, thinking someday…

All my somedays are lost now, and my foolishness in wasting them is what scares me now.

Maybe I’ll have to answer for it.

Someone screams, and I know I’ve been found. A woman hovers over me, uncertain, saying words I can’t understand in soothing tones. I want to shake her, scream at her. Tell her I’m already gone, not to waste her life. Tell her to go. LIVE. Tell her there’s no time not to.

**Photo by CoffinFairy on DeviantArt

Introducing Tales From the Hollow Tree: Volume One!

Hello lovely readers! We here at Tales From the Hollow Tree don’t have a new story for you today, but that’s only because we have a big surprise that we’re very excited about—we hope you’ll like it too! 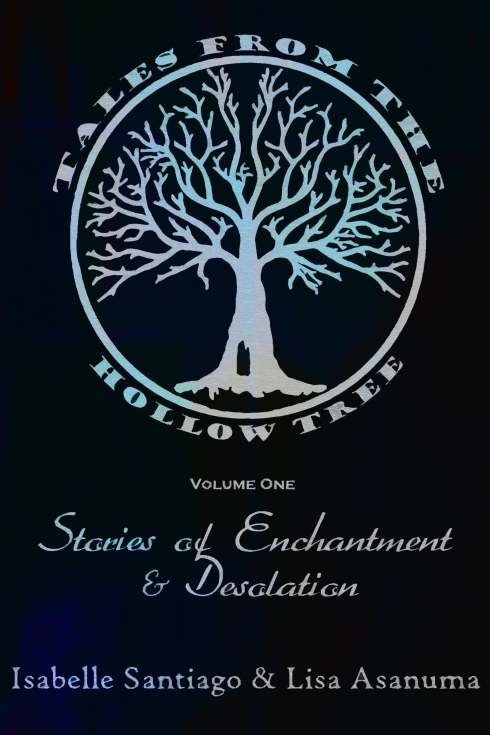 Isabelle and I have loved this project so much that we wanted to see if we couldn’t package them up nicely for readers to have to read at their own leisure, so soon we will be releasing an ebook of ten collected stories from Tales From the Hollow Tree—eight you’ve read before and two that are all new and will only be available in this book! Stories of Enchantment and Desolation is just that—a collection of tales where the line between alluring and devastating is blurred or crossed altogether. These books will be published in a beautifully formatted .pdf and will be available through various sources by the end of November for 99¢. We’re so excited!

Isn’t our cover lovely, by the way? My awesome husband designed our new logo, and as you can see, we’ve got a new banner to match! What do you think of it?

A Perfect Pause by Isabelle

“I thought I’d find you here.”

As usual, his rich baritone caused a warmth to blossom in her chest, across her cheekbones, to the very tips of her ears. Each step he took toward her changed the earth around them, brightening the hazy skies, making the air feel as crisp and cool as it tasted. Darkened, multicolored leaves fell from the thinning trees and crunched beneath his feet, a final gasp of life as they surrendered to the Fall.

She closed her eyes and winced against the sound. END_OF_DOCUMENT_TOKEN_TO_BE_REPLACED

Light the Sea by Lisa

It was tradition. On the last day of Autumn before the oncoming death of Winter, lights are set adrift on the sea to carry prayers for the safe return of our men, lost on far-off waves, far-off shores.

The women lining the beach are here for different reasons, and many think terrible things about the others. Maybe her man didn’t return because he didn’t want to. Maybe she should give up, when her father is clearly dead. Maybe she doesn’t deserve to be here… her son hasn’t been gone long enough to bother the gods with.

When we sing, though, we sing together, and our voices ring strong and true, each of our singular devotions combined in a harmonious plea for our loved ones.

The tune dies down and the women gather together, tell each other their story, why they stand on the sand and set lights on the tide. Who they are praying for. How long they’ve been gone.

Eventually, as the lights float like glowing flotsam towards the horizon and disappear or go out, one by one, the women drift away as well.

“Come, Nali,” my mother says, her touch light on my shoulder. I pretend not to hear her, though. I don’t turn away from the lights, so small on the water now. I can’t just yet.

This is not our first light festival. My father is almost always on a fishing voyage during this season. But it is the first time I have had two lights to light.

“Freezing to death on the beach won’t bring Kole back to you any sooner,” she says, her voice gentle. My mother understands the waiting and the wondering, but an unfair part of me wants to yell that at least she’s had my father. At least she’s borne his children. All Kole left me with was a promise.

I’m ashamed to be thinking such thoughts of my mother and father, but still can’t take my eyes off the lights in the distance.

“He’s been gone months longer than planned.” I say, my voice leaking out doubts that I didn’t even know I had buried in me.

My mother’s strong arm wraps around my shoulders and she holds me to her side. “Maybe he’s trading for supplies for your new home. There are things we can’t get on our island.”

But maybe he’s dead. Maybe his ship crashed, overturned, sank to the depths of the sea.

“Tonight is not a night to doubt, Nali,” my mother says, her voice still gentle, but with a firmness to it now. You’ve sent a light to lead Kole home, you musn’t dim it with your doubts.”

She turns to head home, and I know that I will follow her soon. I picture Kole’s face. Smooth skin, angled features, dark eyes alight with intelligence and laughter.

Far out to sea, a light I have been watching since it left my hands, suddenly flairs—then disappears. I don’t know if this means that my prayer has been answered, or not.

This story is inspired by a real (but different) island ceremony.