I wanted to write up something new and interesting that’s been tinkering around my brain all week, but unfortunately, as my entire house is currently in boxes and I’m moving tomorrow, I couldn’t find the time to do it justice. Maybe for my next Friday freebie I’ll give it a whirl. 🙂 In the meantime, I thought I’d leave you guys with a small scene from a WIP I’m really excited about.

I pulled my knees closer to my chest and wrapped my arms around them finding a measure of comfort in the faded scent of laundry detergent permeating his cotton bedspread.

“Not yet. There’s still time. We can try something else…”

I reached out to stop his desperate pacing; only we never made contact. My fingers slid through his forearm as though they weren’t even there.

END_OF_DOCUMENT_TOKEN_TO_BE_REPLACED

I wanted to try something different today, so I looked up a set of challenge words a drabble community and decided to write ten short drabbles about Livvy and Theo, from a book I’m working on tentatively titled Jethro, as a writing exercise. Here are ten little insights into this pairing, in five sentences or less.

She wears a ring on a chain around her neck. He asked once about it, and she said it was her mother’s. He wanted to ask more, because it didn’t look like a wedding ring or anything, but she got that sad smile that always came when her mother was mentioned, and he decided to let it wait for another time. She wasn’t ready yet. He couldn’t blame her.

It wasn’t really a word she’d ever thought too much about, but when she did, it was about role-models. About normal men and women who did courageous things, who changed history or people’s perspectives. The word had never conjured up special powers or anything. Special powers didn’t make a hero, after all, not in the real world―but then, special powers weren’t supposed to exist in the real world. Neither was she.

END_OF_DOCUMENT_TOKEN_TO_BE_REPLACED

His dreams were a strange kaleidoscope of colors. A touch of the rainbow broken into pieces of shattered glass. It took her a while to realize they were actually gemstones — cut, carved and shaped by his loving hands. When she went deeper, further into his subconscious, she found a world she could get lost in, a place of rolling green hills and rich brown earth. A mountain range decorated the horizon and the blue sky stretched as far as eternity.

His world smelled of earth and bark and iron. There was a hut, his own private little place at the very end of the dirt road, past the little village with stone cottages and wooden roofs. Within it, she found a scorching, suffocating heat.

END_OF_DOCUMENT_TOKEN_TO_BE_REPLACED

thephoneix’s bookbag: The Wicked Woods by Kailin Gow (A review)

So this week I continued with my quest (mind you it’s a new one) to try books by authors that I haven’t read before. Now I’m not sure how long this quest is going to last before I dash back into the comfortable arms of my favorites, but hopefully I’ll get through the stack that’s currently resting on my desk. A girl can dream right?

Anyway this week I decided to go with Wicked Woods by Kailin Gow, whose Frost series I’ve heard such great things about. Despite my love for fairies/fae (I’m blaming Peter Pan), I decided that I would give Wicked Woods a whirl first and go from there.

Now Wicked Woods starts with Briony Patterson who finds herself living with her great Aunt Sophie in Wicked Woods, Massachusetts after the disappearance of her parents and younger brother. Apparently disappearances are the norm as it seems people tend to walk in the woods and never come back. Briony finds out pretty early that Wicked Woods seems to be a nexus where all types of creatures go bump in the night.

I got to admit I was curious to see where Ms. Gow was planning to take what had been a promising premise, but I found out soon (and I mean soon) just exactly what was going on in Wicked Woods. At times I was in disbelief at what seemed to be some kind of parody of Buffy right down to the forbidden love of slayer/vampire and geeky sidekicks. Without giving away anymore spoilers, from the one dimensional characters to the predictable plot, I was sadly disappointed in what promised to be something good. I sadly give this book a disappointing C, and frankly now I’m weary in trying out the Frost series. Still I sometimes find that an atuhor can surprise you when he/she writes something different.

So what did all of you think for those who read it?

I’ll see all of you next Thursday to discuss “Evermore” by Alyson Noel. 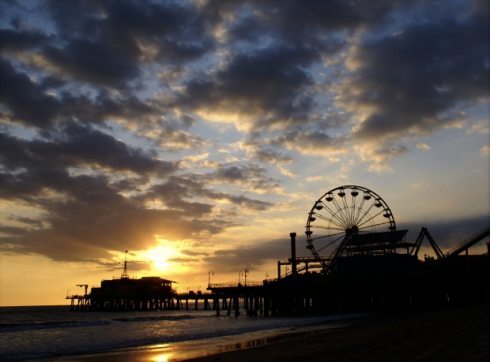 Navida stood at the edge of the Santa Monica pier, looking down. It was her last visit, her very last gift.

The first thing she’d done was make a list of everything she hadn’t had a chance to do in her other six visits—she’d parasailed and climbed a mountain and ridden a Vespa and egged a house. She’d done almost everything she’d wanted to. She’d even fallen in love.

His name was Shane and he was an artist. He’d even painted her picture—number 47 on her list. She’d spent a thrilling four months with him. She’d tried to tell him what she was, how she didn’t have much time to be with him, but he’d never really listened to her. In the end it was a blessing—he’d left her for an exotic dancer near Marseilles, said she was too young for him, too young for this life.

The things he didn’t know.

She leaned far over the metal railing of the pier. There were warning signs all over as to what you could or could not do, but she climbed up a few bars of the fencing. Down below, the ocean roiled with the high tide, and three salt tears fell silently into the Pacific.

She breathed in the familiar smell of brine, and the wind touched her face, carrying with it a whisper of the world she was returning to. She shivered slightly, even as something deep within her core yearned for home.

The sun was still resting its full weight on the horizon, though, and she had until the last ray sank underneath the waves.