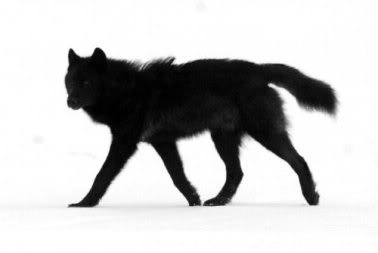 The Gytrash is a spectral creature of North England myth, appearing to lost or way-laid travelers on lonely roads  as either a large lion-like dog, donkey, or horse.

The creature occasionally manifests itself to lead a lost traveler to the right path, but most encounters are of a more sinister nature, leading the travelers astray, never to be found again.  When the creature appeared as entirely dark, with eyes burning like coals, it’s believed to be at its most malevolent.  It is one of many forms of spectral dogs, in particular, and fairly rare.

The most common reference for a Gytrash is the scene in Jane Eyre, where Jane wonders momentarily if Pilot, Mr. Rochester’s dog who has found her on her way to Thornfield, might possibly be this mythic beast.  She’s reassured when she sees Rochester riding his horse, as “Nothing ever rode the Gytrash: it was always alone.”

For such a small moment in the book, and such a rarely-heard-of creature, this scene has always stuck with me, as has the image of the Gytrash,

appearing on dusky roads and luring wandering travelers astray.  There’s something particularly sinister in the idea of what most people would expect to be a subservient creature  leading tired and lonely travelers astray, in the guise of companionship.  This is one myth that I wouldn’t be surprised to feel the tugs of if I were ever to find myself on an abandoned country road in Europe somewhere.  Maybe even here in America, if the conditions were just right.  If I go for a long walk and don’t end up coming home… well, it may well have been a Gytrash that I’ve let lead me astray.  I think I’d keep away from that one with the burning-coal eyes, though… at least I’d hope I’d have enough sense as that.

Lisa is a professional freelance writer and editor, along with a bookbinder and knitting obsessee. Lisa has a passion for YA literature (inside her passion for literature in general) and is currently working on her first novel. END_OF_DOCUMENT_TOKEN_TO_BE_REPLACED
This entry was posted on Thursday, February 25th, 2010 at 3:47 pm and tagged with charlotte bronte, creatures, england myth, gytrash, jane eyre, myths & legends, spectral dog, spectral figure and posted in Thursday Myths & Legends 101. You can follow any responses to this entry through the RSS 2.0 feed.
« Book Geek Wednesday: I’m Reading…
Fun Friday: Yuck »