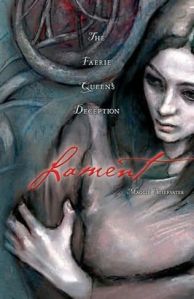 It’s no secret that there’s sort of been a Faeriesplosion in the YA section of the book store.  Well, maybe a parasplosion is a bit more accurate, but admit it, there are a bunch of faerie books out there… we’ve reviewed a handful of them right here.  I’ve read a few, and poked around at several more, and I really wanted to find one to fall breathlessly,  head-over-heels in love with, but instead I kept getting frustrated.

Many books on the market are just not what I’ve been looking for, where the Faerie world has been “reinvented” as a grunge-type underworld.  Which is okay, and certainly one way to deal with the issue, but the ones I’ve read (Tithe, for example) just haven’t done it for me.  This is for multiple reasons, but the main one has always been that… well personally I always thought faeries were cool enough (not to mention threatening enough!) on their own.

And then I heard all the buzz about Maggie Stiefvater’s Shiver, and basically swallowed that book whole, which caused an impending demand to read Stiefvater’s other two published books, which leads us to Lament.  I’m not going to tell you that this book grabbed me and held me in place from the very first page, because that would just be lying—it took until page six.  After that, though, I was a goner.  Goner than gone.

I am, embarrassingly, almost speechless about this book, because it is so very good.

The main storyline is this: Deidre Monaghan is a normal teenage girl.  She happens to be exceptionally talented at two things: music, and being completely invisible in high school.  Then one summer day at a music competition she’s found and entranced by the slightly older, and utterly fascinating Luke Dillon—who finds her fascinating as well.  While she knows that something is not normal about Luke, and he knows she knows it, she can’t or won’t bring herself at first to question it.  As events (or otherwise) continue to throw them together, though, strange things are happening around and within Deidre, leading her to the discovery that she’s a cloverhand, or one who can see faeries.  And really, that is just the beginning.

There is something immensely lyrical about this book, yet at the same time the language is very fresh and the wit is quick and lively.  It’s the seemingly effortless passing between the modern and the formal that is so breathtaking.  Well, that and the fact that Luke keeps calling Deidre “pretty girl,” because really, I think I gushed that much more every time he did it.  The wonderful thing about this story is that, for all its fantastical elements, the main storyline rings out true and exceptionally identifiable—the story of someone with quiet insecurities, who is suddenly recognized for being beautiful, interesting and powerful, and being recognized as such, becomes so.  Deidre seems to realize her own possibilities as they are seen by Luke, the wayward gallowglass.

Of course the more powerful Deidre becomes (and “awesome” is a fitting description, just by the by), the more danger she’s in, as the jealous Faerie Queen wants her head.  She has the protection of iron with her at all times, but with malicious, and outright homicidal faeries coming out of the woodworks all around, will it be enough?  I can’t tell you.  Well I could, but I’m not going to.  You’re just going to have to find out for yourself.  All I can say is that this is honestly the most delicious book I’ve read all year.  Good enough to read a second time immediately after finishing—though I have Ballad, the sequel, so I suppose I’ll work on that first (she says coyly, even though she’s almost 80 pages into it already).

Meanwhile, Lament has a lot of nice cameos by the PRETTY side of Faerie.  The Daoine Sidhe and a certain triplet of child-sized faeries were of particular delight.  And I may have already said too much about Luke, but let’s just say that he’s dream-worthy.  Ballad focuses on Deidre’s best friend James, who is promising quite a story himself, which I will be telling you about soonly.

Lament gets an A++ from me.  Ms. Stiefvater? You officially have a fan for life.

Lisa is a professional freelance writer and editor, along with a bookbinder and knitting obsessee. Lisa has a passion for YA literature (inside her passion for literature in general) and is currently working on her first novel. END_OF_DOCUMENT_TOKEN_TO_BE_REPLACED
This entry was posted on Tuesday, December 22nd, 2009 at 8:00 am and tagged with ballad, book review, don't miss this one, faerie, faerie queen's deception, lament, lament: the faerie queen's deception, luke dillon, maggie stiefvater, shiver and posted in Lisa's Tuesday Perspective. You can follow any responses to this entry through the RSS 2.0 feed.
« TV Magic Monday: Sailor Moon
Book Geek Wednesday: Goddess of the Night by Lynne Ewing »