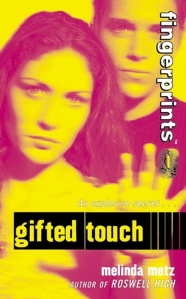 I’m gonna go out on a limb here (a fairly strong and stout limb, actually) and say that I”m betting most of you have never heard of this series.  If I hadn’t bought all seven of them the minute they came out, I probably wouldn’t own them all, because once they were off the shelves they were forgotten about and swept under the rug.  This series, I firmly believe, hit just a bit too early.  YA was on the verge of exploding into the enormous, glorious genre it is now, full of paranormal deliciousness—but this hadn’t happened yet, and and so Fingerprints slipped through the cracks.

How does this start?  Rae is an it girl.  She has a perfect boyfriend and a near-perfect life, wherein she’s buried deep and hard the secret of her dead mother—her mother who had murdered someone and gone crazy, dying in an asylum.  One day at school Rae’s absolute worst nightmare comes to life.  She starts hearing thoughts in her mind that aren’t hers, and—scared to death that she’s becoming like her mother, Rae freaks—in front of the whole school.

After spending a summer in a psych ward, Rae has convinced her doctors that her not-her thoughts have all gone the way of the wind, but unfortunately it’s not true, and stranger than that, she’s starting to feel like the thoughts are real, as crazy as that sounds (and she’s certainly ready to believe she’s crazy).  But if the thoughts are real, she has bigger worries than her sanity, because someone wants to kill her.

Oh I love this series.  Book one is fab.  Rae is such a great character, because she used to be the sweetheart of the school, basically, and now she’s forced to the other end of the spectrum.  Her “friends,” the uppercrust at Sanderson Prep are happy to leave her hanging high and dry after the “incident’ that lands her in the asylum.

In desperation, Rae ends up banding together with a couple friends from the support group she’s forced to attend, trying to clear the name of Anthony, an anger-management kid who was framed in an attempt on Rae’s life—and learning in the process that she’s really not crazy after all, but instead she has a pretty awesome gift—picking up the thoughts people were having while touching things, by touching their fingerprints.  (Which I guess is a spoiler, but it’s one of those spoilers you get off the back of the book, not to mention the title of the series.  So.)

You can read an excerpt of Gifted Touch here.  If you can find this in a library or used book store (or Amazon!) I highly recommend it.  I can’t go for long without re-reading the series myself – which is why I’m reviewing it for you now.  I give the book a hearty A.

Lisa is a professional freelance writer and editor, along with a bookbinder and knitting obsessee. Lisa has a passion for YA literature (inside her passion for literature in general) and is currently querying on her first novel. END_OF_DOCUMENT_TOKEN_TO_BE_REPLACED
This entry was posted on Tuesday, November 24th, 2009 at 8:00 am and tagged with anthony fascinelli, best book series you've missed, book review, extra-sensory, fingerprints, melinda metz, rae voight, ya fantasy, ya paranormal, young adult, young adult fantasy, young adult fiction and posted in Lisa's Tuesday Perspective. You can follow any responses to this entry through the RSS 2.0 feed.
« TV Magic Monday: Roswell
Book Geek Wednesday: City of Bones by Cassandra Clare »